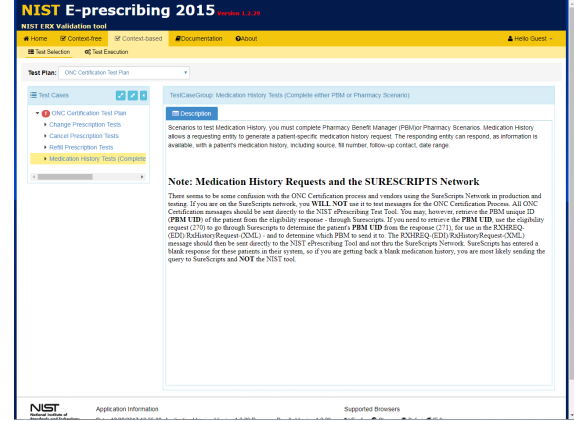 In the modern times, healthcare information technology has become integral in matters, evaluating efficacy of clinical operations systems including prescribing. The NIST tool is an online downloadable tool that has been specially developed to test standards and the requirements that relate to the message specifications that are expressed within the 2015/2014 Editions of the Standards & Certification Criteria. According to ONC, this tool tests the extent of adherence to the Edge Protocol standards at the time valid communication sessions amid a System Under Test and ETT. These include Data portability, Ambulatories setting only, view, down and then transmit the information or data to the third party and lastly come up with summary care reports or what we can say transitions care.

It is now known that virtually all hospitals in many developed countries have embraced HERs which emphasizes about interoperability. Interoperability is basically using those systems to send as well as receive messages regarding the data with the aim of ensuring that the cost is cut down and that quality is improved.

According the statement by ONC, such tools are helpful in terms of have standards that for messaging best practices in addition to the scoring criteria.

Also, I noted that the kind or type of network that is used affect the certification process. For example, when SureScripts Network is used, then one will be forced not to use it in the test messages that regard ONC Certification Process (NIST, n.d). I also noted one interesting thing that transmission of ONC Certification messages is such that they must be directly channeled to the NIST ePrescribing Test Tool in the event that one chooses to use SureScript Network. In cases one gets black messages as regards the medical history of the patient, and then the query may not have been sent to NIST directly but to SureScript